I am not a spontaneous person. I know because I just double checked against this Wikihow guide on how to become a spontaneous teenager. While I myself am not a teenager, I figured who knows spontaneity better than the teens.

Guys, being a spontaneous teen is so simple. All you need to do is go fork a yard, hit up a McDonald’s for 3 am ice cream (#random!!!), shoot some stuff with a paintball gun, and play The Nervous Game. (Spontaneous teens are into consent but aren’t gonna be, like, forthright about it or whatever.)

So, I broke rule number one of being a spontaneous teen because I did a thing a couple weeks ago that could’ve gotten me dead. But ha ha, joke’s on you, teens. Because I didn’t get dead at all. I got super internet famous among a handful of men in their 50s who appreciate good grammar and have strong opinions on the length of Subway sandwiches.

(Shout out to the people who knew I was alluding to the comments section of this piece I wrote for Gizmodo.)

(Also, shout out to me for making a shout out to literally everyone because the only reason you are reading this is because you found my blog via that Gizmodo piece or you’re friends with me on Facebook or you’re my mom (Hi, Mom.))

While I am not spontaneous, I am occasionally impulsive, which is how that fine piece of journalism came to be. I guess I was caught on a day I was feeling very “Yes, And…” The ‘and’ being “and my impulsivity with this decision will definitely cause a spike in my anxiety around feeling out of control in situations, right?” Cool improv, neurotic tendencies.

In the piece for Gizmodo, they understandably wanted me to ramp up the scariness factor of the waterslide, but I’m surprisingly not too bad with heights or roller coasters or giant waterslides or the like. I was significantly less afraid of the death-y part of the waterside and way more afraid of having a boob pop out mid-ride. So, I am probably not the person by which to gauge your fear.

I included all the relevant, interesting stuff in the actual waterslide piece and saved all weird, dumb stuff for here. You’re welcome? 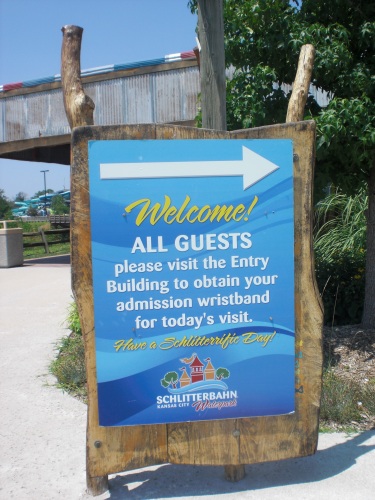 If I could draw your attention to the sentence in yellow, which reads: Have a Schlitterrific Day!

This call to action was everywhere – on this welcome sign, in the gift shop, on my wrist band, on the exiting sign. At first, “Have a Schlitterrific Day” sounds like a curse cast upon you by a German witch. But with time and the ingestion of much public pool water, “schlitterriffic” becomes a beautiful piece of poetry you might consider turning into a lower back tattoo.

That is the line of people waiting for the park to open. I wrote a whole section about waiting in lines, because the only thing more exciting than waiting in a line is reading 200 words on waiting in lines. I edited it out for the original piece, but here it is if you’re into behind-the-scenes, sneak peek, bonus features*!!!

THE EARLY BIRD GETS TO RIDE THE BADASS WATERSLIDE

People are quite literally coming from across the country to ride this thing. I stood in line between someone from Minnesota and another person from Florida, and we were like a living, breathing geography lesson waiting to plunge to our deaths.

The process leading up to riding the Verrückt involves many lines – a ticket line, a waiting-for-the-park-gates-to-open-if-you’re-early line, a line to reserve a spot on the Verrückt, and a final line to get on the ride if you’ve survived previous lines.

The scariest part of my day was probably the waiting-for-the-park-gates-to-open line, where people were plotting their stampede to the front of the Verrückt reservation line. I overheard a mom tell her child, “Just stand behind the lady for now. You can push past her once the park is open.” I was the lady.

Anyway, get to the park early because the Verrückt ride reservations fill up quickly. Also, maybe don’t be afraid to trip a child?

Clearly Ashley and Andrea did not share my fear of nip slips. And if you’re wondering, yes, I did wear a one-piece bathing suit under a tank top and shorts. Spontaneity!!

Well, I’m off to work on a piece for Buzzfeed on what it’s like to ride the world’s fastest spinning tea cups while drinking tea with three french bulldogs dressed like the Royal family.

4 thoughts on “Schlitting Myself and Being Spontaneous”