On Reddit, there’s a popular, recent-ish subreddit called /r/RoastMe entirely devoted to people asking other users to, as the name suggests, roast them. People willingly submitting photos of themselves to be mocked by strangers from around the world? Sounds great! Said an alien trying to pass as a human but lacking capacity for self-doubt yet still aware of what “roasts” and “subreddits” are for some reason.

Typically, roasts involve other people subjecting the Roastee to good-natured ridicule. But ha ha, joke’s on you, internet. Why ask strangers to make a mockery of me when I’ve got a mirror and 25 years overflowing with self-doubt? I can roast myself just fine, thank you.

And I will be doing so shortly after making sure “roasting myself” doesn’t have a very different connotation in Urban Dictionary…okay it doesn’t. So, let’s get back to you watching me roast myself raw.

Today’s roast will feature my own childhood Halloween costumes for comedy and to be current and not at all because I want you to look at how goddamn precious I was between the ages of 2 and 8.

HA yeah right, Doctor Baby Mia. I bet when you get to high school, you’ll only be a mediocre science student and barely pass the AP Bio test, but you’ll still ask your AP Bio teacher to write you a letter of recommendation for college, and you’ll immediately regret it when you realize his validation of you as a science student was the academic equivalent of “…no no but she’s like super nice.” Mostly because he definitely used some variation of that exact phrase in his letter of recommendation.

Also, is this the proudest you’ve ever seen your dad?

Um, wow. Way to reinforce racial stereotypes by dressing as a tiger. Everyone knows tigers are native to Asia and not even the same part of Asia as your family’s lineage. So, congrats to you for further perpetuating the idea that all Asians look the same. Disgusting.

Also, very offensive to appropriate feline culture when there is an actual cat person standing right next to you. 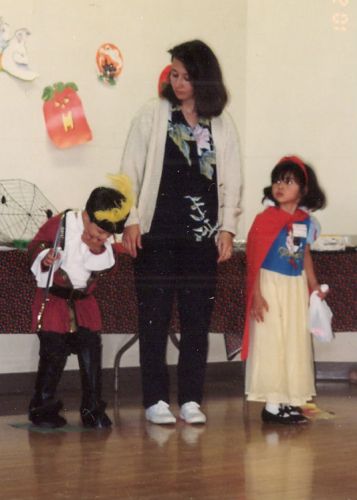 Gonna take a brief moment to roast Present Me for having the first thought in my head be “Snow White? More like Snow Half-White/Half-Filipino.”

You have a college degree, Present Me. Were you not present for the tiger costume roast that just happened? Were you too busy wondering why a costume of Snow White would have Snow White’s face on it to think of an actual roast? Are you still not 100% sure how roasts work?

Me, 4ish, as Baby Bop from Barney 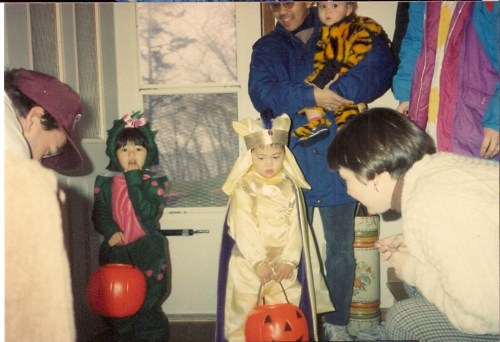 Why’s your hand in your mouth, Baby Bop Mia? Because that’s the only way to make your mouth agape enough to adequately express how impressive your mom is for making both a Baby Bop and Prince Ali costume, both complete with headpieces?

No? Just licking chocolate remnants off your hands?

No? Just trying to distract everyone from the fact that your younger brother is now in the offensive-to-real-cats tiger costume? NICE TRY.

What are you supposed to be, tiny Mia? Princess of Handing Down Your Costumes to Your Younger Siblings and Having Them Look More Adorable Than You? How’d you get that title? What land do you oversee? Do you feel mentally prepared to take on the duties of being in the public eye? Are the societal pressures of being a princess the reason why your face looks so disengaged?

Oh, wait. This is actually a candid photo of my siblings and I in our natural state. Me and my sister are just two literal witches, and my brothers are ninjas. This is a normal day in the Mercado household. Nothing to roast here or comment on or dissect or infer here.

What a great roast, right? Tell me how you would’ve roasted me in the comments, but only if you’ll be nice but not patronizing, and on second thought, don’t say anything at all thank you I don’t need to grow or change.