Pokemon GO. Is it good? Is it bad? Is it already a dead trend and why didn’t you post this a month ago, Mia?

I did extensive research by reading, like, 10 people’s Facebook statuses and concluded one of Pokemon GO’s biggest perceived downsides is that it’s keeping people from caring about things that “actually matter.”

This struck a chord with me because there’s nothing I love more than educating myself on current events in a way that requires zero effort and is completely noninvasive to my garbage flow of life.

So, I’ve come up with a solution for me and you and mostly me to have mindless fun while staying kind of informed: Rename your Pokemon to reflect the things you should be paying attention to.

Then when people are like, “You’re playing Pokemon GO? How dare you enjoy yourself ever? What about ISIS? Hmm? Have you ever thought about that?” You can be like, “As a matter of fact, I just caught an ISIS yesterday so #Me4President2016.”

Here are some starting ideas if you’re too lazy to even Google “things I should be paying attention to.”

Who wouldn’t want to educate themselves on the racist implications of voter ID laws after being reminded by a thing that looks like the love child of a Hippo-Bear and a sentient bath toy? A lot of people? Great, I’ve got 20 of these so let’s find your threshold.

Pidgeys are everywhere, all the time. Just like mass shootings! Catching a Pokemon that’s not a Pidgey is almost as rare as Congress actually passing common sense gun laws.

Look at this duck baby’s thousand mile stare and tell me it doesn’t make you want to register to vote.

This is a dust monkey with a walking cane up its butt, and don’t even pretend you don’t get why it’s representative of student loan debt.

5. “ALL LIVES MATTER” AS A RESPONSIVE HASHTAG 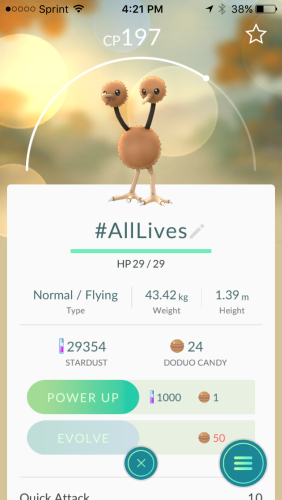 This Pokemon is just a big dumb bird that was too lazy to be two birds and grew another head so it could be extra loud and pointless. It is upsetting and unnecessary and now it’s official the physical embodiment of the phrase “All Lives Matter.”

Every time a conversation on feminism excludes non-white women, Amandla Stenberg materializes and spanks you with a think piece on intersectionality. That’s why the name of this Pokemon is incomplete and not because of character limits or anything else.

I don’t know. Just like, check in with him. See if everything’s cool.

What’s great about this birdie with a bike helmet is that while it’s flapping, the wing span changes, perfectly showing the varying degrees of the wage gap based on race and gender!

10. TAMPONS BEING TAXED AS LUXURY GOODS 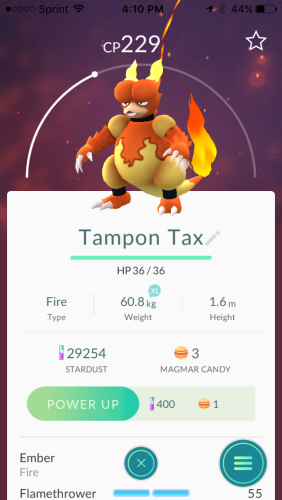 V cool that the creators of this app made a Pokemon that looks just like me on my period. #RepresentationMatters

Just farting out water bubbles, being offended by all my period jokes. 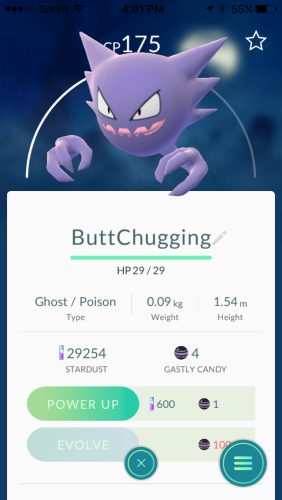 Our eggs are mad and they’re not gonna take it anymore! 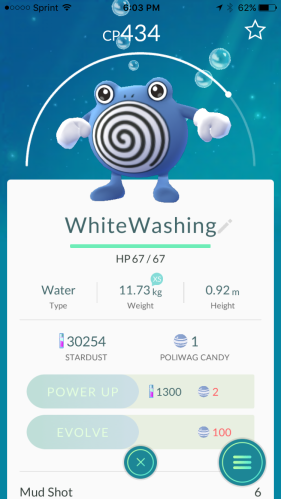 It’s like the evolved version of racist character portrayals in pop culture, and by “evolved” and I mean “also bad and not helping anyone.” 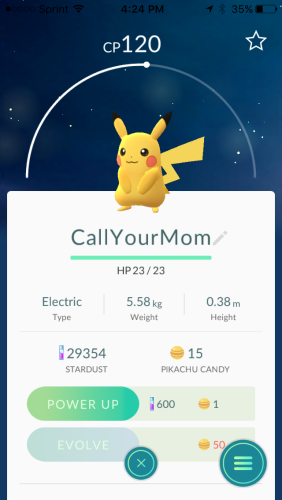 Because nothing brings you down from the high of catching a Pikachu like the sweet sting of guilt.

Ding dong this is what your biological clock looks like, and it’s telling you it’s time to catch up on your memes to stay cool and hip.

Charmander is a dinosaur fire baby, and he’s the protector of all the shows. He’s super ineffective because you have no self-control and are definitely going to ruin everything for yourself by checking Twitter before you’ve seen the season finale of The Bachelorette, you impatient monster.

Please note that one of Gender Bias’ moves is “Zen Headbutt.” It’s the more powerful version of “Leaning In.”

How are you staying relevant and current? Is it by putting “Candy Crush” in a folder on your phone called “Police Brutality”? Did you change your Tinder bio to “swipe right for affordable health care”? If not, why do you hate progress?